Mother’s Day! Annunciation! Happy to all mothers! But do you know that Europe is currently run by childless people? These are Merkel, who has married twice! May, which

no children, but no gender, there is a man! Juncker, who has not married, but whether he is a gay or gay he knows.
Juncker shortly before the 1989 election was seriously injured in a road accident and spent two weeks in a coma. Juncker has been an irremovable head of the Luxembourg government for 18 years, as well as a finance minister for 20 years. In July 2013, he gave his resignation to a prime minister after a noisy media scandal related to revelations of a number of violations and abuses in the SREL Intelligence Service.
As a schoolgirl, Merkel shows particularly good achievements in 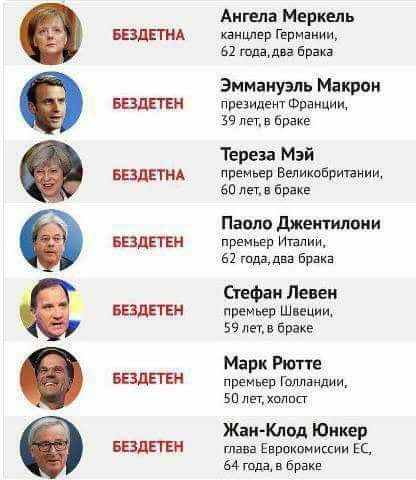 mathematics and Russian. Angela was a member of the pioneering organization „Ernst Telman“ and the Union of Free German Youth. As a student, she decided to follow physics at Leipzig University „Karl Marx“ and in 1973 she moved to Leipzig. His diploma thesis was presented in 1978 and received the mark „excellent“. He graduated from the Central Institute of Physical Chemistry at the Academy of Sciences in Berlin where he worked in the Department of Theoretical Chemistry.
During his studies, in 1974 he met his first husband, Ulrich Merkel, also a physics student. This is happening in Moscow and Leningrad, where

there is an exchange of physics students. In 1977, they married Templin. They divorced in 1982. In 1984, Angela began to meet the chemist Joachim Sauer, who was still married. They marry in 1998. Angela Merkel has no children.
Well the cue! Since 2007, Macron has been married to his former French teacher Brigitte Tronio, almost 25 years older than him, and in whom he fell in love at the time he was a student. His teacher, Brigitte, has three children from a previous marriage.
Let’s not talk about ours who have not touched a woman for years. Sam is like a dog that serves the childless.